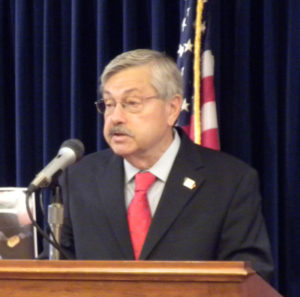 Governor Terry Branstad says he’s not worried about the Department of Transportation’s decision to close driver’s license stations in Carroll and Spencer on August 31st. The DOT made the decision after the department didn’t get the total increase in funding it requested.

Branstad says the Carroll County Treasurer plans to open a driver’s license renewal station in his office. “Because of the timing of it, I want to talk to the DOT about extending the time before they close it so Carroll County can be ready,” Branstad says. He says the Caroll and Spencer DOT offices had the least amount of traffic.

“And my guess is that when it is all said and done the public in these counties — Carroll County and Clay County — will feel like the public does in the other counties. They really appreciate having the quality of services that can be provided in these rural counties by county treasurer’s office where they are not that busy,” Branstad says.

The Republican governor also talked about the DOT plans to close seven maintenance garages in Akron, Centerville, Corning, Gowrie, Rock Valley, Sabula and Soldier. DOT leaders say the cutbacks may lead to some roads not getting plowed, but Branstad doesn’t buy that.

“They’ve been in the process of consolidating that over time, and in so doing — and I’ve seen the math — they are going to be able to plow the roads and I don’t think it really is going to make a big difference in terms of that area,” Branstad says. “We are always looking for ways that we can more efficiently deliver the services and have more of the money going for building roads and bridges rather than for administrative costs.”

On another topic, Branstad was asked about the prospect of the three state universities expanding the sale of alcohol at athletic events. “I think they’ve got to be really careful. This is a Board of Regents decision, but there is a lot of drinking that goes on before the games with all the tailgating and all that. And binge drinking is a problem on college campuses,” Branstad says. “So, I think they need to look at the whole picture in terms of deciding whether if this is the thing they need to do, not just in terms of the money that they will bring in.”

Branstad made his comments during his weekly meeting with reporters.