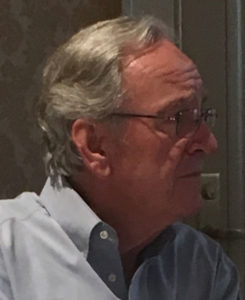 Former Iowa Senator Tom Harkin was the first speaker to take the stage this afternoon at the Democratic National Convention in Philadelphia.

“Twenty-six years ago today, our nation won a hard- fought battle to end discrimination for over 50 million people when we signed into law the Americans with Disabilities Act, the ADA!” Harkin began, to cheers.

Harkin, whose late brother Frank was deaf, was the chief sponsor of that bill in congress.

“We still have a way to go before we build a truly inclusive America,” Harkin said. “When, 26 years later, 70 percent of adults with disabilities in America aren’t in the workforce, it’s time to take action.”

Harkin told the crowd a President Hillary Clinton would champion the rights of disabled Americans.

“Hillary Clinton will fight to eliminate the subminimum wage and ensure that a fair day’s work earns a fair day’s pay,” Harkin said.

Harkin taught the 20,000 people in the convention hall a gesture from American Sign Language – linking fingers and rotating joined hands in a circle in front of the body.

“That, my friends, is the sign for America. It’s a beautiful sign. Think about it. We’re all together. No one is left out in this constant circle of life that is America,” Harkin said, to applause and cheers.

Harkin was surrounded on stage by more than a dozen disabled Americans. He spoke moments after a gold medalist in the Paralympics led the crowd in the Pledge of Allegiance and a blind man sang the National Anthem.