You are here: Home / News / Harkin reveals he got a stop talking sign during 1984 convention speech 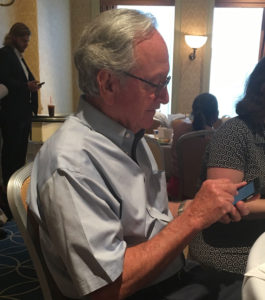 Tom Harkin checks his phone at the Democratic convention.

Former Iowa Senator Tom Harkin is scheduled to speak at the Democratic National Convention this afternoon, at about three o’clock Iowa time. Harkin is promising to make it brief.

But Harkin revealed he got the hook the first time he spoke at a national convention. It was 1984 and Harkin was running for the U.S. Senate for the first time. He was given a speaking slot on the main convention stage.

“I kind of got going and two or three minutes went to four or five minutes or six minutes and there were these potted plants along the front (of the stage) and I looked down out of the corner of my eye and I saw this guy crawling underneath the plants and reaching up on the podium and putting a piece of paper on the podium in front of me,” Harkin said, explaining the paper read: “Stop talking.”

Harkin is one of the Clinton delegates at the Democratic National Convention.