You are here: Home / Sports / Hawkeyes must deal with expectations 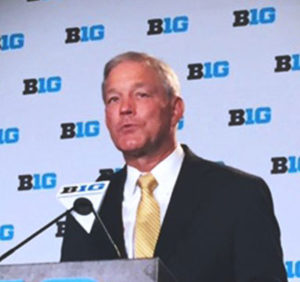 What a difference a year makes for the Iowa football team. A year ago, coach Kirk Ferentz was being questioned about the direction of the program at Big Ten Media Day. This morning, Ferentz was asked about the Hawkeyes’ chances of repeating as West Division champs after posting a 12-0 regular season mark.

“Predictions did not provide to be very fruitful last year and that will be one of the first messages we will send to our team”, said Ferentz. “We were picked fourth or fifth last year and it had no bearing on the season. That goes both ways.”

This will be the first season that the Big Ten moves to a nine game schedule.

“I think it is great if you have five home games and not so good if you have four. That to me is the downside.”

Iowa opens at home against Miami of Ohio on September third.