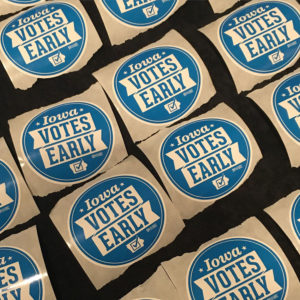 Stickers given to Iowa delegates at the convention.

Thirty of the 51 delegates from Iowa will cast their votes for Hillary Clinton tonight when roll call is taken at the Democratic National Convention in Philadelphia. Christina Blackcloud, a member of the Mesquakie Settlement in Tama, is one of those Clinton delegates.

“She supports everything that I support, basically,” Blackcloud says. “For instance, gender equality, justice, social equality, environmental concerns and all that kind of stuff.”

Twenty-one Iowa delegates, including Corey Jones of Anamosa, will be voting for Bernie Sanders.

Jones says Sanders supporters secured a victory by “pushing” Clinton to take more progressive policy positions — and there’s only one way to ensure those policies get enacted.

“At the end of the day, the revolution cannot continue without a Democratic president,” Jones says.

Delegate Joel Potter of Des Moines says he got involved in the Sanders campaign because he’s concerned there’s too much corporate money influencing politics. 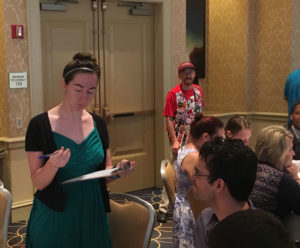 “And when I heard yesterday that Hillary committed to overturning ‘Citizens United’ I was very happy,” he says. “I’m happy to see the influence of the Bernie campaign on the platform.”

Kenneth Adderly of Waterloo, a retired professor, is a Clinton delegate at the convention. He predicts the “Never Hillary” movement within the Democratic Party will cease and Clinton’s poll numbers will rise after the convention’s over.

“And if she doesn’t, what it will do it probably save that 18 percent of Sanders supporters who the media say will not vote for Hillary, it will bring them over,” he says.

Former Iowa Senator Tom Harkin will be speaking on the convention floor this afternoon, sometime in the three o’clock hour. Today is the 26th anniversary of the Americans with Disabilities Act Harkin steered through congress. He’ll be joined on stage by disabled Americans who’ve benefitted from the law.