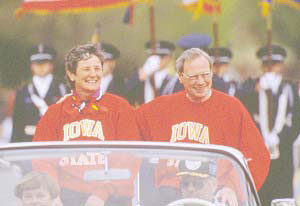 ISU photo of Tom and Jean Sutherland at the VEISHEA parade in 1992.

An Iowa State University graduate who was held hostage in Lebanon for more than six years has died.

Tom Sutherland died this past weekend at his home in Fort Collins, Colorado, he was 85. Sutherland was a native of Scotland who received his masters and PHD in animal breeding at Iowa State University.

He began his teaching career at Colorado State, and was serving as the dean of the agriculture faculty at American University in Beirut, Lebanon when he was kidnapped on June 9th of 1985.

Sutherland was held with fellow Iowa State graduate Terry Anderson, a reporter who had also been kidnapped, until they were released in 1991. Sutherland was held for 2,354 days, the second longest time of any of the hostages. He later wrote a book on his experiences, called “At Your Own Risk.”

Sutherland is survived by his wife Jean, who is the daughter of the late Willam Murray, an ISU professor who help create Living History Farms, and three daughters.