You are here: Home / News / Last push from Sanders backers at national convention 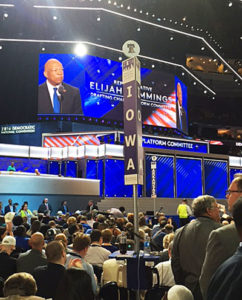 Some ardent Iowa supporters of Bernie Sanders haven’t yet given up on trying to get their candidate the Democratic Party’s presidential nomination and a few might just leave the national convention in Philadelphia if it doesn’t happen tonight.

It’s possible some Iowa delegates at the Democratic National Convention may leave tonight if Bernie Sanders does not win the party’s presidential nomination.

Delegate David Johnson of West Branch says Bernie Sanders is his candidate and the big question is where the movement goes from here. It may just walk out of the convention — but not before one last pitch. Johnson has been calling “super delegates” who back Clinton, lobbying them to switch to Sanders tonight.

“The super delegates are still free to vote however they want, so it’s a matter of convincing them that Bernie Sanders is a stronger candidate,” Johnson says. “I think that they’re starting to feel the heat.”

Delegates at the convention who support Sanders signed petitions yesterday, preparing an exact count of the number of delegates Sanders will have on the convention floor tonight. Lucas Haffner of Lytton, another Sanders delegate from Iowa, says for many Sanders supporters, “it would be difficult to fall in line” behind Hillary Clinton.

“I think a lot of our loyalty is to the ‘not me, us’ type of mentality,” he says. “…I see the possibility for action.”

Haffner has been lobbying rank-and-file delegates to switch from Clinton to Sanders tonight, but Haffner says unlike some of the heated arguments in other states, it’s been a “civil discussion” among Iowans.

“Ultimately, the consensus is that 80 percent of the values and initiatives and policy and what not is very similar. It’s 20 percent that we differ on,” Haffner says. “It’s a large 20 percent. It’s something that we definitely need to highlight to the American public.”

Clinton supporters among the Iowa delegation have been stressing party unity. Dean Genth of Mason City hosted a Clinton “listening tour” event in his living room just before Clinton officially launched her campaign in 2015.

“I’m willing to say: ‘Hey, let’s just all come together and make this happen,” he says. “No matter what has happened in the past, let’s concentrate on the future and pull together to win races from the courthouse to the White House.”

Emily Felton of Monticello says she and other Sanders supporters have been focused on securing a more progressive party platform.

“As a party, I think we really need to reevaluate what way we approach these things, because it’s common sense,” Felton says. “When you push at people and you push party unity, it’s just like you push a person. They’re going to push you back.”

Felton wants to see the end of “super” delegates — the elected officials and party leaders who are about 15 percent of the delegates at the convention.

And Felton, like most Sanders supporters, points to the leaked emails showing national Democratic Party staff plotting against Sanders.

“If they’re really pushing unity on us and then this is what’s being said behind closed doors, as a person, as a member of this party, as someone who’s donated by time and efforts not just to my candidate, but to the party, it’s really disheartening that’s what our leadership is doing,” she says.

“I know in the news you hear a lot of things and obviously there’s been a lot developing recently, but just as someone who’s kind of doing the day to day work, I actually feel tremendously optimistic and I know that we’ve got Sanders supporters in the room,” Ansara said. “I just feel like we all recognize what’s at stake and the work that we need to do together.”

Ansara is in charge of Clinton campaign strategy in Iowa and the other “battleground” states that will decide the fall election.