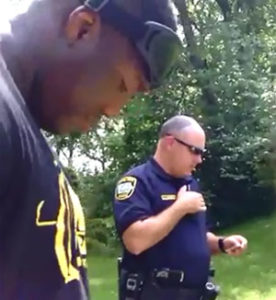 Faith Ekakitie waits as an officer checks his ID.

Iowa City Police have released body camera video from officers who stopped a University of Iowa football player in a local park last Wednesday after the report of an attempted bank robbery nearby.

A news release says the body cam video was released after the stop “generated extensive media coverage.” The video shows officers coming up to Faith Ekakitie with guns drawn.

Ekakitie is a 6-3 290 pound defensive lineman from Brampton, Ontario who will be a senior this season. He was wearing headphones when officers approached him and at first could not hear their commands.

“Just keep your hands up, it’s probably not you, but we’ve got to check, you understand?,” the officer says. Ekakitie, who is black, had goggles on his head and was wearing all black clothing and a Rose Bowl backpack. The robbery was at the First American Bank was called in at 1:53 p.m. and Ekakitie was stopped at 2:03 p.m. He was questioned by an officer about his moped.

“Why did you park your moped around the corner?” and officer asks him. “I was actually playing Pokemon Go, believe it or not,” Ekakitie responded. The officer then explained to Ekakitie why they decided to stop him. “We got a report of a large black male wearing all black and you’re in the vicinity and it’s pretty close to here,” one officer says. The other officer said it was three blocks away and questioned him about his goggles. Ekakitie says he wears them when he rides his moped.

Officers ran a check on Ekakitie and found he was not the person wanted in the robbery. He was relieved. “I will not lie to you, I was terrified, Ekakitie says,”I’ve never had anyone point a gun at me.” An officer replied, “Sorry, we don’t like doing that.” Police say the whole encounter lasted six minutes. The officers in the video were not identified. The bank robbery suspect has not been caught.

Ekakitie’s Facebook post on the incident went viral.  He thanked officers for the way they handled the situation.

Here is footage from one of the cameras: