You are here: Home / Education / ‘Thrilled’ Iowan, a friend of Tim Kaine for 37 years, jetting to Philly 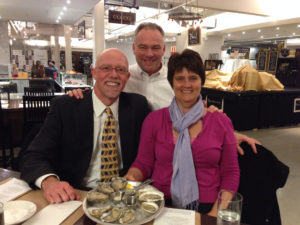 David Miles first met Tim Kaine in the fall of 1979. Both were entering Harvard Law School. They lived in the same dormitory, on the same floor, and Miles and Kaine were in the same “section” of first-year law students, so they took all their classes together.

“An intensely bright guy, just as common as he could be, very interested in getting to know other people and their stories and what they were about — just a lot of fun to be around,” Miles said in describing Kaine, “….a great sense of humor, a real dry wit.”

When Kaine returned from working at a Jesuit school in Honduras, Miles and Kaine were housemates in Cambridge during their final year of Harvard Law.

“It’s been 37 years and our families are friends,” Miles said. “There’s a whole group of us that get together.”

“He’s just a really good friend and forms deep relationships, I know that,” Miles said. “…He doesn’t drop off old friends and trade in for new ones.”

And Miles said Kaine seems to collect an ever-expanding network of friends.

“Here’s a person who has the right values and who you can trust to give you sound counsel and to be a really good partner,” Miles said during an interview with Radio Iowa.

“Somewhere along the way she started to understand the Tim Kaine that we’ve known for so many years,” Miles told Radio Iowa. “She’s been in Iowa a lot and I don’t think I’ve ever seen her look more positive and relaxed than I did when she was introducing Tim to the rest of the country.”

The rally revealing the Clinton-Kaine ticket was last Saturday in Miami. Tonight, Kaine will speak at the Democratic National Convention in Philadelphia. Miles and that small band of college chums are flying to Philadelphia to experience the moment as a group.

“As long as I have known him, what has animated him has been social justice and the public good, so those that are worried about progressive causes I think should take great comfort in a Harvard educated lawyer who said: ‘I’m going to do civil rights work for 17 years,'” Miles said, “and then got into public service for all the right reasons.”

Some Iowans may recognize Miles’s name from his work in state government. Governor Tom Vilsack appointed Miles to the board that governs the three state universities. Miles was president of the Board of Regents for four years. It means Miles knew both of the rumored finalists Hillary Clinton was considering as a running mate.

“It was pretty hard to wipe a smile off my face when I looked at that being the choice,” Miles said. “Tom Vilsack, to me, shares a lot of the same characteristics and values as Tim. It’s all about the service.”

Miles is chairman and co-founder of a venture capital firm and a member of Winnebago Industries’ board of directors. He served on the state Board of Regents from 2007 until 2013. Miles also has served on the board of trustees for Drake University, where he earned his undergraduate degree.