You are here: Home / News / Tim Kaine rallies with Iowans at DNC in Philadelphia (AUDIO)

Early this morning, Hillary Clinton’s running mate spoke to Iowans who’re in Philadelphia this week for their party’s national convention. Virginia Senator Tim Kaine said he knows “how high the stakes are” in November. 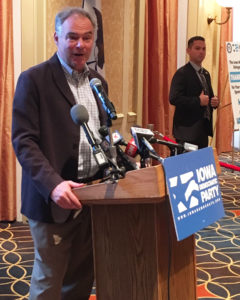 Kaine was the mayor of Richmond and served as governor of Virginia before winning a U.S. Senate seat. He reminisced with Iowans about campaigning in Iowa for Clinton’s Caucus campaign last year.

“You guys have such a wonderful small d and capital D democratic tradition and it always makes my heart soar when I get a chance to come out and you also have one of my favorite public servants in the history of the world,” Kaine said, and the crowd applauded, as Kaine added:”Tom!”

When Kaine finished his remarks, he vaulted over the rope line Clinton campaign staff set up, shaking hands with Iowans until he got to Tom Harkin. Kaine gave his former senate colleague a hug and Harkin said: “God bless you,” as the two embraced. Later, Harkin said the best speech he’d ever heard in the private room where senators meet had been given by Kaine. It was about race relations. For 17 years, Kaine worked as a civil rights lawyer in Richmond, Virginia, which Kaine pointed out was “the capitol of the Confederacy.”

“That was my life’s work and I thought it was going to be my life’s work. I got mad at my city council because it was too racially divided,” Kaine said. “In May of 1994 I ran and won my first race. That was eight races ago.”

Kaine stressed his Midwestern roots this morning. He didn’t mention that he was born in St. Paul, Minnesota, but Kaine did talk about his childhood in Missouri.

“Growing up in Kansas City, working in my dad’s Iron-Worker-organized welding shop in a very non-political household, if you had told me or if you had told my parents who are 81 and with me this week that I was going to be here in July of 2016, they would not have believed it,” Kaine said. “None of us would have believed it. When we grew up, politics was like baseball or Hollywood…It just seemed like a completely different world.”

Kaine also revealed he has an aunt and uncle living in Fort Madison.

“I’ve had a lot of fun in Iowa over the years,” Kaine says. “I did RAGBRAI in 1996 and I’m so happy that none of the pictures survived. Me and Spandex — that’s not what you want out on the web.”

Kaine will be on the convention’s center stage tonight, addressing delegates as he accepts his party’s nomination for vice president. Part of his short remarks this morning seemed to give a bit of a preview.

As Kaine walked out of the room, Iowans invited him to campaign at the State Fair — and at next month’s “Wing Ding” in Clear Lake, a fundraiser for Democrats in north central Iowa.

(This post was updated at 9:33 am with additional information.)