You are here: Home / News / Giant shell game planned for Mississippi River as thousands of mussels are moved 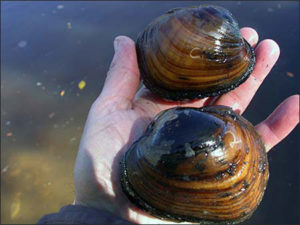 Department of Transportation officials from Iowa and Illinois have teamed up for a massive relocation of mussels on the Mississippi River.

U.S. Fish and Wildlife Service spokesperson, Heidi Woeber says the plan is to relocate some 450,000 clams to make room for the piers of the new I-74 bridge between the two states.

“A team of divers — it’s a company Ecological Specialists — and they are expert malacologists, which is what an expert of freshwater mussels is called, and they will set up a barge and work with dive teams,” Woeber says. Those divers will search for and collect the various mussels.

“They will sort through them and mark them –especially the endangered species of which there are three federally-listed and a couple of state-listed species — and then those will be marked and relocated to the new sites,” according to Woeber. 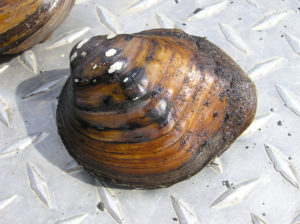 The move of the mussels to other areas of the river has been carefully planned. She says the planners are experts on the freshwater mussels in the Mississippi and they have surveys of the areas beds that have a similar habitat and similar species as the area where they are now. It’s expected to take around two months to find, mark and move all the mussels.

“I think they are shooting for about 60 days of working every day — sometimes two shifts. I know that they are planning on working into October,” Woeber says. Woeber says it’s important to protect the Mississippi mussels.

She says there is also a commercial clamming industry along the Mississippi. The clams are sold to Asian countries to help with pearl production.

Woeber says the shells are ground up and a grain of the mussel shell is put into a clam and that is the seed to make the freshwater pearl. She says the grain of the shell is more pure and makes a better pearl. Crews have begun setting up for the relocation project, but the actual work will not start until August first.

Photos courtesy of the U.S. Fish and Wildlife Service.