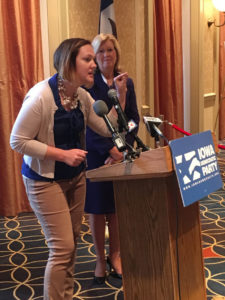 Iowa delegates at the Democratic National Convention had an emotional morning meeting on Wednesday.

Former Minneapolis Mayor R.T. Rybak was first to speak to the Iowa delegates yesterday. He’s a vice chairman of the Democratic National Committee.

“I want to say I’m sorry,” Rybak began, an apology that got a standing ovation.

Next, Tim Kaine, the party’s vice presidential nominee, made a brief, surprise appearance before the group. The delegation cheered his remarks and many surged forward to take his photo or shake Kaine’s hand as he left the room. 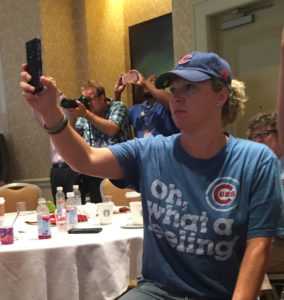 Ingrid Olson was among those using a smart phone as Bernie Sanders spoke to Iowans at the DNC .

After that flurry of activity, Ingrid Olson of Council Bluffs stepped up to speak. Olson’s a Sanders delegate. She offered the Clinton backers in the room some advice: quit telilng the Sanders crowd to vote for Hillary because of Trump.

“Please give messages of why we should come together with you,” Olson says. “…We can bring our party together, but it starts with us here and we have to take that home.”

Sanders delegate Rebecca Mueller of Muscatine was next.

“What I want you guys to understand on the Hillary Clinton side, and the party establishment, is that unity is not asking us to remove our Bernie buttons,” Mueller said as she tapped the buttons she was wearing.

As Mueller continued, her voice cracked and she cried.

“Do not silence us,” she said. “…You listen first and then you say: ‘What are the barriers that I can bring down?’ And the way that you’re going to bring us together is you listen first.”

Mueller earlier had said she’d been listening to convention speakers — and learning things about Hillary Clinton she’d never heard before.

“I did not know that she was on the pavement, just like I am, just like all these Bernie delegates out here and so many of the others,” Mueller said. “But I learned that her story is actually so similar — so similar, you guys — to our story.”

Jennifer Gernhart of Fort Dodge, another Sanders delegate, aired another grievance. No Sanders backer was invited to announce Iowa’s results during the convention roll call Tuesday night. Instead, four Clinton backers did it.

“We wanted to stand next to you. It was our victory, too,” Gernhart said. “We’re all the same party.”

Gernhart suggested the youthful Sanders crowd was being treated like “ignorant children.”

Throughout the tense exchange with Sanders delegates Wednesday morning, Clinton backer and party chairwoman Andy McGuire repeated these phrases: “We want everyone to be part of the process…I’m listening.”

The debate could be a harbinger of party infighting ahead. Sanders supporters believe they’ve secured a slim majority of slots on the Iowa Democratic Party’s state central committee.