You are here: Home / News / Trump campaigns in Iowa as Republican nominee 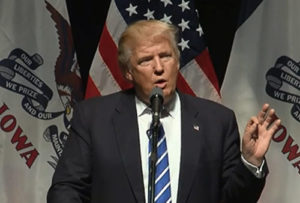 During his first stop in Davenport, Trump talked about the ongoing Democratic National Convention, accusing speakers of telling lies about him. Trump said while Democrats attacked him, they failed to  address key issues facing the country.

The picture Democrats have been painting about the country isn’t reality, according to Trump.

“Everything is hunky dory, everything is wonderful,” Trump said of the Democrats’ convention. “They are not talking about ISIS and what ISIS is doing and our depleted military, where our military isn’t being properly funded.”

“Thirty-three-thousand emails were deleted. And that’s okay?” Trump asked. “Could you imagine if you deleted emails? Forget it.”

Those comments led the crowd to chant: “Lock her up.” It’s a chant Republican convention delegates used last week at their national convention in Cleveland.

Trump responded to the crowd in Davenport with this directive:  “No, vote her out.”

Trump then turned his attention to Iowa and mentioned Governor Terry Branstad and Senator Joni Ernst, as well as Iowa’s Caucuses.

Trump criticized the national media for playing up Marco Rubio’s third place finish in the Iowa Caucuses. Trump told the crowd in Davenport the political system is rigged, but he learned a lot about campaigning in Iowa.

“And because I did, I really did well in Iowa in all fairness….I came in second, a close second. I then went to New Hampshire and I did much better because of Iowa. I won New Hampshire in a landslide and then I went on a run that was incredible, South Carolina, North Carolina, Massachusetts,” Trump said.

Trump promised that Iowa’s 2020 Caucuses would remain first in the nation if he’s president.

In Cedar Rapids, Trump admitted to thinking about what might have been in 2016.

“I went around for two months, even after I won in New Hampshire. I kept going back to Iowa, I kept saying: ‘What happened?'” Trump asked rhetorically.

Trump said during his Iowa stops Thursday that he wanted to hit some of the speakers at the Democratic National Convention so hard ‘their heads would spin.

“I saw lies. How would you like to be me, watching television?” Trump asked last night.

Some 2,400 people filled the Adler Theater where Trump spoke. Officials estimated the crowd in Cedar Rapids at about 3000.