You are here: Home / News / Vilsack: being considered for VP a ‘shout out’ to Iowa (AUDIO) 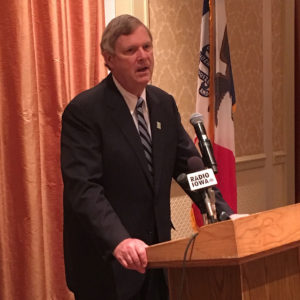 Tom Vilsack speaking to the Iowa delegation at DNC.

U.S. Ag Secretary Tom Vilsack, the former Iowa governor, today said it was “inappropriate” for Donald Trump to appeal to the Russian government to “find the missing” emails on Hillary Clinton’s email server.

Vilsack brought up Trump’s comments this morning during a speech to Iowa delegates at the Democratic National Convention.

“What about yesterday where he invited a foreign country with which we have an adversarial relationship to inject itself into our politics?” Vilsack asked. “It’s an offense.”

Two delegates yelled, “Treason!” in response, but Vilsack did not repeat that word. Later, reporters asked Vilsack if he thought Trump had violated federal law.

“I think it’s something that people should carefully and closely look into,” Vilsack said. “I think certainly, at the very least, it was inappropriate for him to side with Russia yesterday and I think it’s another indication of why he is disqualified to be president.”

Trump said this morning on Fox News that he was being “sarcastic” at a news conference when he suggested that if Russia was “listening” — he hoped they’d be able to find Clinton’s missing emails. 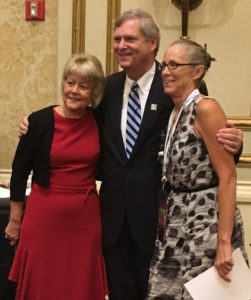 Both Vilsack and his wife, Christie, spoke at the morning breakfast for Iowans in Philadelphia for the Democratic National Convention.

Vilsack told the crowd Democrats have “no greater calling” this year than to make sure Clinton’s elected in November.

“And Iowa, you have got a responsibility of delivering the state of Iowa for Hillary Clinton, make no mistake about that,” Vilsack said. “…We’re having a great time here and we’ll have a great time tonight, but the moment this convention ends, the real work begins.”

Christie Vilsack urged the Iowa delegates — many of whom have met Clinton several times — to share stories about why they feel a “personal connection” to Clinton.

“I think everyone in this room has a story like that, that you can share not just in Iowa, but with people all over the country who you know,” Vilsack said. “who may not be as interested as all of us are in all of the policy.”

AUDIO of remarks Christie, then Tom Vilsack made to Iowa delegates

Last night, Iowa’s former first couple sat in Bill Clinton’s box inside the convention hall. Tom Vilsack was sitting in the front row, right next to the former president. Vilsack told reporters this morning that he and Clinton were “impressed” with former New York Mayor Michael Bloomberg’s speech.

Vilsack said both he and Clinton thought vice presidential nominee Tim Kaine gave a speech that showed the country Kaine is a man with a “moral compass” and “great compassion.” Vilsack was on Hillary Clinton’s “short” list and rumored to be the finalist, with Kaine, for the V-P role. Democratic presidential candidate John Kerry considered Vilsack as a running mate in 2004, so this is the second time Vilsack’s been in the running for his party’s vice presidential nomination, but not picked.

“I learned to be incredibly humbled by the fact that over a long period of time people still had a level of respect and believe in my capacity,” Vilsack told reporters. “I think it was a great thing for me, but I think it was a great ‘shout out’ to the people of Iowa, because of the work that I was done as governor.”

In addition, Vilsack said it was a credit to the people who work in the federal agency he now runs. Vilsack has been U.S. ag secretary since January of 2009, which means he’s the top administrator of the U.S.D.A. It is the fifth-largest federal agency, with about 100,000 employees.