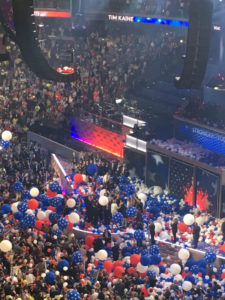 Balloons dropped on the convention floor as the event came to a close.

An Iowa native — a Republican — was among the speakers last night at the Democratic National Convention. Doug Elmets once worked as an intern for Senator Chuck Grassley and he worked in the Reagan White House as a speechwriter.

Elmets, who grew up in Des Moines, said he’ll vote for Hillary Clinton because he shudders to think what Trump would do as president.

“President Reagan famously said: ‘Tear down this wall.’ Trump says: ‘Build the wall.’ Because that will make America great again?” Elmets asked. “Reagan saw nuance and Trump sees the world as us-versus-them where someone with brown skin or a foreign-sounding name is likely to be to blame for our troubles.”

Elmets said he’s never voted for a Democratic presidential candidate, but will do so for the first time this November.

“While Hillary holds many policy positions that differ from my own, her qualifications are indisputable,” Elmets said. “Hillary knows that our strength as a nation lies in uniting, not dividing.”

Elmets told the crowd of Democrats the Republican Party’s 2016 platform was laced with “alarming…anti-immigrant, anti-gay and anti-women positions that do not represent the views of most Americans.”

He offered this analysis of the GOP’s presidential nominee:”Trump is a petulant, dangerously unbalanced reality star who will coddle tyrants and alienate allies.”

Elmets closed his speech at the Democratic convention by making a plea to other Republicans, to put loyalty to country over loyalty to party and vote for Clinton.

Elmets is a California-based political consultant. He graduated with honors from the University of Iowa and his 90-year-old mother still lives in Des Moines.