You are here: Home / News / Iowan compares his GOP convention experience with what happened in Philly this week 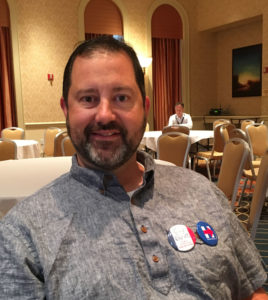 One Iowan has a unique perspective on national political conventions like the one in Philadelphia that wrapped up last night.

“It’s been really cool. That’s the only word that comes to mind. It’s a lot more high energy, diverse,” he said. “Even with the two factions that were finishing out a process that started on a February night in Iowa, it was still a lot less acrimonious it felt like.”

Oelson switched his voter registration from Republican to Democrat last September. He backed Bernie Sanders in the Iowa Caucuses and was a Sanders delegate at this week’s convention. Oelson was sometimes introduced by his fellow Iowans in Philadelphia as “our newest Democrat.”

“I can argue with any one of these people here about: ‘You spent too much money,’ and it’s an adult conversation,” he told Radio Iowa. “…But I’m not arguing anymore about whether my relatives’ sexual preference is an issue.”

In 2014, Republicans in Linn County voted to kick Oelson out of a leadership position in the local party. It happened after Oelson helped a gay man who was the son of a former Republican legislator run for office — as a Democrat. Oelson, who is an attorney, had been an active Republican since he was a teenager. He once worked as a staffer for Republican legislators in Des Moines. Oelson said this week’s convention has given him a new perspective because, at the age of 45, he is “finally an old guy” in the crowd.

“I’m now wearing my official Iowa Delegate pin that is a Bernie Sanders pin right alongside with a Hillary Clinton pin, which is what I’d always planned,” Olson said. “to support the winner.”

Oelson was a Republican in 2008 when he won a seat on the Linn County Board of Supervisors. He’s running for reelection to a third term this year. His Republican opponent is Randy Ray, a teacher at Cedar Rapids Washington High School.