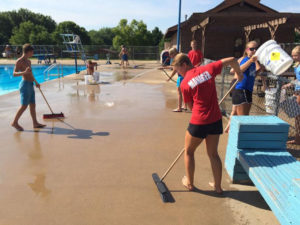 Workers scrub down the deck area of the Municipal Pool in Marion. Photo courtesy KCRG-TV.

A chemical residue found sprayed around an eight-block area in the eastern Iowa town of Marion has been identified as a fungicide.

“We don’t feel, at this time, that it was an amount that was harmful,” Krebill says. It’s believed a crop dusting plane may’ve strayed too far from a field Tuesday night and sprayed the neighborhood. “I had some residents call who said planes hit the tops of their trees,” Krebill said. The Iowa Department of Agriculture’s Pesticide Bureau is looking into the matter and reports the pilot responsible could face penalties.

“The have two investigators in town…and they’ve been investigating,” Krebill said. Marion residents were told vehicles and other hard surfaces that were hit by the chemical could be cleaned with soapy water and all clothes and bare skin that came into contact with it should be washed. One area impacted by the incident was the Marion Municipal Swimming Pool.

“They got all of the lifeguards out there and they were scrubbing the fences, the decks, chairs, benches, the building…they scrubbed everything down,” Krebill said. The city of Marion has posted a “frequently asked questions” section on their website about the chemical.