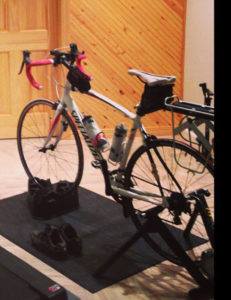 Jefferey Demers saved to buy this bike while on his last tour of Iraq.

A couple from Jefferson, South Dakota is asking for the public’s help to find a lost bike which fell off their car when they left to go back home from RAGBRAI this week.

Breanne Demers says she and her husband Jeffrey had to leave Tuesday because of work commitments, and made their way around the bike route on gravel before hitting the highway.

“We got on Highway 25, we headed north and we then turned west on Highway 34. And we continued on that route and we stopped in Red Oak to get a bite to eat, and we happened to notice that the strap had broken on the rack,” Demers says. She says here husband’s bike was last on the rack it had fallen off somewhere along the route.

Jeffrey served three tours in Iraq and the bike has sentimental meaning to him, as he bought it following the final tour. “When he met me he got into biking and he didn’t have a nice road bike,” Breanne explains. “And on that tour as he was making money overseas, he was sticking a little bit aside…and he saved enough to buy this bike and all the components he wanted on it. So for him, it’s kind of like his little medal from coming back from overseas, you know, it has a lot of meaning to him.”

They put out a call on Facebook and some state biking websites asking if anyone had seen it, and got some idea of where it may’ve fallen off from a woman who called them.

The woman had seen the bike in the middle of road somewhere between one and three miles south of Highway 34 on Highway 25. The woman stopped and moved the bike to the should and called the Creston Police Department. Creston police told the couple the bike was gone by the time they were able to check on it.

She says the sentimental background of the bike is the reason they want it back as they know he will probably need to get a new bike for rides. “When an aluminum-framed road bike hits the pavement at 70-miles-an-hour — not likely it’s going to be real ridable, the frame will be bent. She says she told her husband he likely won’t be able to ride the bike distances as he used to anymore and he will have to get a new bike anyway . “He said ‘I know but I want that bike back, I don’t care if it hangs in the garage, I can just see it every day.'”

The bike is white Specialized brand with red handle bars (see picture) . It has an Albrechts bike shop sticker on it. If find the bike or know where it may be, please call Breanne at 712-635-3161.