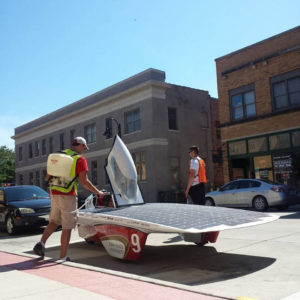 Given the starting and ending points, it was initially hoped the race might be trekking though Iowa this year but that won’t be the case. The race begins today at the Cuyahoga Valley National Park in Brecksville, Ohio. Goode says, “When we start, it’s going to be in northern Ohio, we dip down through Dayton and southern Illinois, go through St. Louis, and then we dip further down into Missouri going through a national battlefield from the Civil War, then heading up to a couple of parks in Nebraska and then shooting over to South Dakota.”

The race is scheduled to conclude after a week on August 6th at the Wind Cave National Park in Hot Springs, South Dakota. Next year, the ISU team plans to take part in the World Solar Car Challenge in Australia.