You are here: Home / News / Branstad urges Trump ‘to focus on the issues’ and avoid ‘traps’ like controversy with Khans (AUDIO) 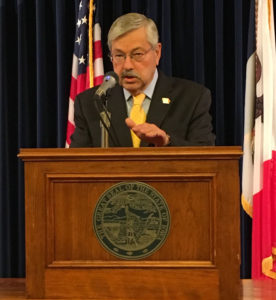 Governor Terry Branstad today said it’s “a mistake” for Donald Trump to get sidetracked into a war of words with the father of a soldier who died in Iraq in 2004.

“I just think that anyone that has died in the service of our country is a hero,” Branstad said. “And I think that was a mistake. I believe the focus needs to be on the differences he has with Hillary Clinton in terms of policies.”

A Muslim couple who immigrated to America appeared at last week’s Democratic National Convention. Khizr Khan spoke out against Trump’s call to ban Muslims from terrorism hot spots from entering the United States. Trump first questioned on Twitter why the dead soldier’s mother didn’t speak. This morning, Trump was still tweeting about it, saying he had been “viciously attacked” by Khan. Branstad is not recommending that Trump apologize.

“I’m not going to get into that,” Branstad said. “I’m just saying he needs to focus on the issues that are important to the American people. I saw him do that effectively in both Davenport and Cedar Rapids. I think that’s where the campaign needs to be.”

Trump campaigned last Thursday in eastern Iowa. He’s due in Des Moines on Friday. Branstad has met with Trump and advised the Republican presidential candidate to be “focused and disciplined.”

“I’ve been through a few campaigns and I understand there’s a lot of people who are going to try to set traps for you and all those kinds of things, but I think you’ve got to be very disciplined and very careful,” Branstad said.

And Branstad suggested Democrats set a trap for Trump by having the Khans appear at last week’s convention.

“You know how these things go,” Branstad told reporters this morning. “You’re going to get asked a lot of questions and I think it’s important that you, as the candidate, always to try to bring the focus back to the things that are important to the American people which are jobs, restoring fiscal responsibility and protecting the safety of America and this administration has ignored the real threat we have from ISIS and Islamic militant terrorists.”

AUDIO of Branstad’s weekly news conference, where he discussed the issue starting at the 10:30 mark.

Branstad laughed this morning as he told Iowa reporters their questions “may not be as tough as the national media.”