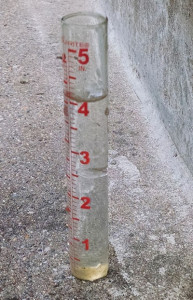 State climatologist Harry Hillaker says most of the state got more rain than normal in July.

“Statewide averaging a little bit over 6 inches — and typically you get about 4.2 inches or rainfall during the month,” Hillaker says. He says there was one area of the state that missed out on the extra rain.

“The far northwest corner along the South Dakota border, where some areas are only roughly about half the usual amount of rain up that way. And fortunately they had had fairly good rainfall earlier this season, but got left out for the most part during July,”Hillaker explains. All the rainy days were offset by the sunny ones when it came to the average temperature.

“Overall averaged out to just two-tenths of a degree cooler than usual,” Hillaker says. “Had a couple of episodes of unusually cool weather, one to start off the first three or four days of the month where our temperatures were well below normal, a very cool Fourth of July for example.” But Hillaker says we also had one week near the end of the month where high heat and humidity made it feel “pretty miserable” outside.

Hillaker says we had heat index of 110 degrees or higher four days in a row from the 20th to the 23rd. The heat index factors in what it feels like with the heat and humidity combined. “And the highest heat index reading of 119 degrees came in Shenandoah,” according to Hillaker. That was on July 21st.