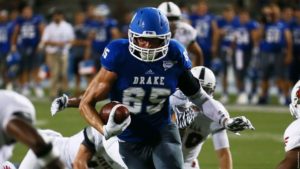 Saubert and the rest of the Bulldogs open the 2016 season on Sept. 3 when they host Quincy to Drake Stadium.