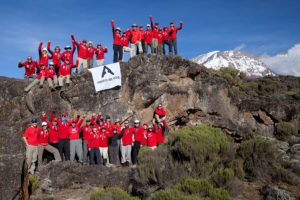 The Above and Beyond group at Mt. Kilimanjaro climb in 2012

A group of cancer survivors and caregivers from Iowa are preparing for a trip to East Africa, where they’ll climb to the summit of Mount Kilimanjaro.

Brad Anderson is executive director of Above and Beyond Cancer, based in Des Moines. “This will be Above and Beyond Cancer’s eighth journey overall and the first one to combine a physical mountain climb with on-the-ground mission work,” Anderson says. The two-week long trip early next year will also involve the building of a Hope Lodge – or hostel – in Nairobi, Kenya.

“Currently there are 30 Hope Lodges in the United States, including one in Iowa City,” Anderson says. “This will be the first ever Hope Lodge outside of the United States and it will be located at the Kenyatta National Hospital in Nairobi.” The American Cancer Society Hope Lodge program provides cancer patients and caregivers with free lodging when their treatment involves a lengthy stay at a hospital or health care facility far from home.

Around 30 people will be involved in the mission trip and will be raising funds for the hostel project. “It’s unclear how much it is going cost, but we’re probably looking at something north of $1 million,” Anderson says. “Above and Beyond Cancer is going to do whatever we can to raise the funds to complete the building of the facility.” Following the building of the Hope Lodge in Nairobi, the group will travel to Tanzania and climb to the summit of Mount Kilimanjaro.

The Iowans will leave for the trip on January 2 and return on January 16.