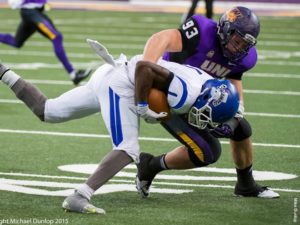 University of Northern Iowa senior defensive lineman Karter Schult has been named to the 2016 STATS FCS Preseason All-America team, it was announced today.

Schult, who earned STATS All-America second-team in 2015, landed on the first-team preseason team along with six other student-athletes representing the Missouri Valley Football Conference. In all, the MVFC had 16 players on the preseason team, leading the FCS.

The Tripoli, Iowa, native returns to the gridiron this fall to anchor an already veteran defensive line that helped UNI to a quarterfinal appearance in the FCS playoffs in 2015. Schult was a first-team All-MVFC selection last season along with landing a spot on two All-America teams.

The senior posted 14 sacks and a school record 22.5 tackles for loss in 2015, leading the league in both. He was ranked No. 7 in the FCS in sacks and No. 15 in tackles for loss and led a UNI defense that kept opposing rushers at bay with a No. 18 ranked rushing defense.

Schult and the Panthers will kick off 2016 in Ames, Iowa, against in-state foe Iowa State on Sep. 3. The game is set for a 7 p.m. kick at Jack Trice Stadium.