You are here: Home / Business / State Treasurer’s office has mortgage settlement funds for thousands of Iowans 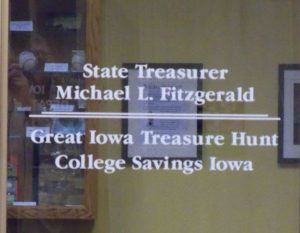 Fitzgerald says the Office of the Comptroller of the Currency has the money from a settlement with lenders who were using improper mortgage lending practices.

“They’ve tried to locate the owners, but we still have over $1.2 million we’re holding for over 2,000 Iowans who have anywhere between 300 and $3,000 coming back to them. And we want to find them,” Fitzgerald says. Fitzgerald says some people may’ve already gone through a foreclosure, but could still be due some money.

“If you had a mortgage between 2009 and 2010 — and especially if you were in financial difficulty with it — you are probably on our list,” he says. The servicers involved what was a three-point-six billion dollar overall settlement are: Aurora, Bank of America, Citibank, CountryWide, Goldman Sachs, HSBC, JPMorgan Chase, MetLife Bank, Morgan Stanley, PNC, Sovereign, SunTrust, U.S. Bank and Wells Fargo. Fitzgerald says you can now claim any money you may be due from the settlement through the long-running program to return abandoned property known as The Great Iowa Treasure Hunt.

“You go to the GreatIowaTreasureHunt.gov and just put in your name, and it’ll pop up if you are there,” Fitzgerald says. He says even if you aren’t due any settlement money, you may find something else.

“When you are there and you punch up your name — you might find you have some other property coming too. Because we have over one million names and we are holding over 300 million dollars for people, so along with that you might find you have other money,” Fitzgerald explains. “It’s really simple, it takes about two to three weeks, and we have easy ways to work with you to prove that you are who you say you are.” Fitzgerald says

The Great Iowa Treasure Hunt program has returned over $214 million in unclaimed property to more than 500,000 people since it was created in 1983.