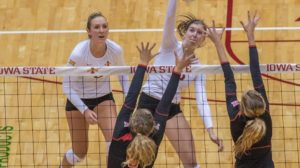 Iowa State volleyball’s Alexis Conaway and Morgan Kuhrt were named to the 2016 Big 12 Volleyball Preseason Team, the conference announced Tuesday. Conaway and Kuhrt were both members of the 2015 All-Big 12 First Team squad.

A junior, Conaway made the jump in 2014 from All-Big 12 Second Team to All-Big 12 First Team as a sophomore in 2015 and will look to continue the progress this season. The Orange City native was crucial to the Cyclones’ attack in Big 12 play in 2015, averaging 2.37 kills per set at a team-high .339 hitting percentage gainst conference foes. For her sophomore year, Conaway finished with 196 kills at 2.04 kps at a .351 hitting percentage, the second-best percentage in program history. Conaway was also among ISU’s team leaders in blocking, posting 72 total blocks at 0.75 per frame.

Kuhrt made another step in her remarkable rise as a Cyclone in 2015, stepping in for the injured Mackenzie Bigbee on the right side and earning All-Big 12 First Team distinction. In Big 12 play last season, the redshirt senior from Waverly led the Cyclones with 3.15 kills per set, which she earned at a .248 hitting clip. It was not just in attack that Kuhrt was a threat, as she also posted 0.25 aces per set, 1.49 digs per set and 0.55 blocks per set against conference competition. For the season, Kuhrt finished with 250 kill at 2.55 kills per set.

Conaway, Kuhrt and the rest of the Cyclones will begin the regular season on Friday, Aug. 26 against Wichita State. First serve is slated for 6:30 p.m., and the match will be televised on Cyclones.TV Powered by Mediacom.