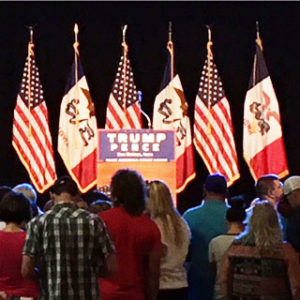 A crowd of nearly 1800 has gathered in downtown Des Moines this afternoon to rally with Republican presidential nominee Donald Trump and his running mate, Mike Pence.

“But you know, Donald Trump beat him fair and square and he’s our nominee,” Ganske said, to cheers.

Ganske told the crowd he’s donated to the Trump campaign twice and Ganske urged Trump’s supporters at the rally to do the same.

Governor Terry Branstad’s son, Eric, is Trump’s state director and the governor spoke briefly to the crowd. Branstad accused Hillary Clinton’s staff of considering a California law that Branstad said would curtail use of corn-based ethanol.

“That causes me great concern because I was governor during the Farm Crisis and I don’t want to go back to another Farm Crisis induced by the bad policies of a Democratic administration,” said Branstad, who started his first run as governor in January of 1983.

A spokeswoman for the Clinton campaign responded to Branstad, saying Clinton is “committed to getting the Renewable Fuels Standard “back on track.”

“While we have engaged a wide range of stakeholders and experts throughout the campaign on biofuels and other issues,” Clinton spokeswoman Kate Waters said, “we do not support replacing the RFS with a national low-carbon fuel standard.”

Lieutenant Governor Kim Reynolds was the third speaker to appear in the “pre-rally” program at the Trump event. She never said the name “Donald Trump” — but Reynolds did urge the crowd to get behind the “Trump-Pence” ticket.

“We need to show not only Iowa but the nation that momentum is on our side,” Reynolds said. “And we did that in the caucuses and the primaries where we saw more Iowans and Americans across this nation show up to vote, where we saw new people coming into our party because they are sick and tired of the direction this country is going in and we’re going to stand up and we’re going to make a difference.”

AUDIO of Ganske, Reynolds then Branstad speaking to crowd, 16:00

Both Reynolds and Branstad hammered Hillary Clinton. The crowd responded to Branstad with the chant: “Lock her up!” It’s a chant that originated at Trump’s nominating convention in Cleveland.

A sheriff’s deputy estimated the crowd today in the Hy-Vee Hall in downtown Des Moines at between 1600 and 1800.