You are here: Home / Education / State Board of Education discusses possible changes to open enrollment rules 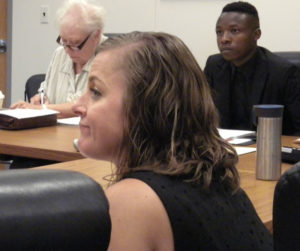 Nicole Proesch listens to Board of Education members.

The State Board of Education is discussing the rules for open enrollment and possible changes to allow a student who may not suffer what’s legally defined as bullying to still open enroll at a new school.

Nicole Proesch, the administrative law judge who hears the cases and advises the board once an appeal makes it to the state level says after listening at several hearings she feels there is a disconnect between the parents feeling heard and the districts running through a process. Proesch says the districts get the request form, and if it is filed in time they move it on, if it is not, they deny it.

“So, there’s probably a little bit a discussion lacking on a local level about what we really think about these kids who are moving and wanting to move out of the district. There’s a reason why the kids want to leave, and I am sympathetic and you are all sympathetic when you hear a situation where an individual is sad and the student doesn’t want to go to school and you know at night the parents at night have to deal with that situation,” Proesch said.

She said school boards have a hard time separating bad behavior to a student from bullying. “I don’t think boards are trying to do the wrong thing, I don’t. You know, they are trying to apply the law the way it’s supposed to be applied,” Proesch said. “There’s just a general frustration from parents then. Again then there’s the disconnect between what bullying and harassment is versus bad behavior.” 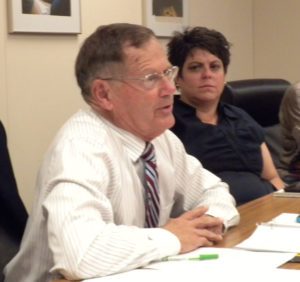 Board member Mike May of Spirit Lake has been discussing the issue with Proesch and other board members. He said he has been frustrated by open enrollment appeals where the student is treated badly, but there is not enough there for the board to override the school district and approve the open enrollment to another school.

“We are not talking about a huge amount of kids, but we’re talking about a significant amount of kids too. And I think as a board we just have a heart for all the kids in our district. And may sometimes those who particularly find themselves on the outside of the in group or in groups and just can’t find a place. I think we find that continually and we find kids who are easy targets,” May said.

May said it can be harder to define kids who fall in this group. “We beat a kid up every day it’s pretty easy that he is getting bullied and harassed right? I mean we beat him up every day before school. But if we give him a frown or me make gestures or we do all kinds of things to that particular person that’s the one that gets at these kids in many cases,” May said. “It’s not that they are getting beat up physically but we tend to ignore that for some reason.”

He said there’s frustration when cases do reach the state level as the board rules conflict with the local control given to school boards. May said the state board has wide latitude in what it can look at and what they can discuss on those appeals — but the rules also say they cannot overrule a local board unless their decision is “unreasonable and contrary” to the best interest of education. “Whatever that means….to me folks that is a contradiction,” he said.

Board member Mary Ellen Miller of Mason City said it is a “manufactured problem” because of the March 1st open enrollment deadline. She said schools don’t want to let students open enroll to another district and lose the state funding they get for that student. “We can’t say that out load, but it is all about money, it’s not about the student,” according to Miller.

Board member Michael Bearden of Gladbrook said it is about money as there needs to be some deadline so districts know if students are leaving and can plan accordingly. Miller said, “If we got rid of the open enrollment deadline, the school would pay more attention to what is going on in their school. Right now they have no incentive to do that.” She asked that the open enrollment deadline be part of the discussion.

May said it is an issue they will continue to work on and will likely have some sort of solution to discuss in a couple of months. He said the discussion will include the Iowa Association of School Boards and other groups.

Proesch said they have had eight and nine requests for open enrollment the last two years. She said some of those could be medical related.