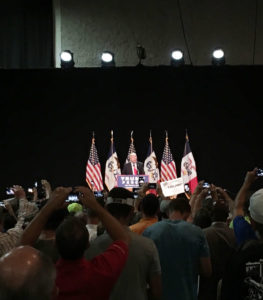 Donald Trump at his campaign rally in Des Moines.

Trump called his Democratic rival Hillary Clinton the “queen of corruption” and accused her of being a “weak” secretary of state.

“After Hillary Clinton, the world went up in flames,” Trump said. “…This is the legacy of Hillary Clinton. It’s called death, destruction, chaos and weakness.”

Trump gave a litany of instances in which he argued Clinton’s influence had made countries like Syria and Libya worse. He specifically used the word “unfit.” It’s a word Clinton and her allies have been using frequently as they describe Trump as being unsuitable for the Oval Office.

Trump also railed about the news coverage he’s been getting.

“It’s so disgusting what’s going on with the media,” Trump said, to supportive cheers from the crowd. “That’s why we have to win.”

Trump again promised Iowans would be first to vote in the 2020 election if he’s president, but – as he did last week in eastern Iowa — Trump said he wasn’t enamored with the Caucus process itself. 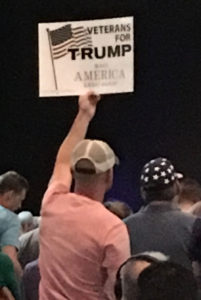 His 61-minute speech this afternoon concluded with a request.

“Let me just tell you: I hope you can get out on November 8th and vote for Trump,” the Republican presidential nominee said to loud cheers.

Iowa is considered one of the few truly toss-up states in the General Election.

“Iowans care about issues like equal pay for equal work, raising the minimum wage and college affordability,” McGuire said. “Hillary Clinton is the only candidate who is talking about these issues and has a plan to improve the lives of everyday Iowans.”

Trump’s appearance today was in the third congressional district. Congressman David Young, the Republican who represents the area, was not present.