You are here: Home / Sports / Cedar Rapids curling club to hold a tournament 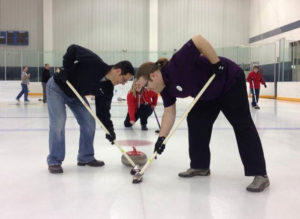 About 120 enthusiasts for the sport of curling are coming from as far away as South Carolina to compete in eastern Iowa later this week.

“We’ll have 30 teams coming in from all around the nation,” Kozak says. “This is actually a fun spiel which means they will be getting a cedar plank, because it’s the CedarSpiel, but it’s more just for bragging rights and a fun weekend to come out with your friends and curl for the weekend.” Curling is an ancient Scottish sport played on ice where members of a four-person team slide 42-pound granite stones across the ice toward a target. The objective is to position as many stones closer to the target than the opponent’s stones at the end of each round.

“It’s a great sport and anyone can come out and try it and do it,” Kozak says. “It takes a while to master. It can be pretty taxing when you’re out there. Over the course of an average game, when you’re sweeping, you’re actually walking/running two miles, back and forth.” Kozak, who lives in Iowa City, has been a curler for nine years. She says it’s a sport of camaraderie, honor, tradition and integrity that requires both physical dexterity and complex decision-making. While it’s been around nearly five centuries, Kozak says not everyone in Iowa is familiar with curling.

“I get quite a few strange looks when I tell people what I do,” she says, laughing. “Most people have heard about it through the Olympics so they’ll have an idea of what it is, but I get a lot of, ‘So, you throw a stone down the ice and sweep in front of it?’ I’m like, yep, that’s what I do.” Curling debuted as a medal sport in the 1924 and went on hiatus until the 1998 Winter Olympics in Nagano, Japan. Coincidentally, Omaha will host the Olympic curling trials in November of 2017.

CedarSpiel starts Friday and will run through Sunday. Admission is free.