You are here: Home / Sports / Davis looking for players to fill out spots in Hawkeye offense 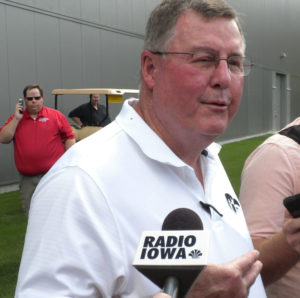 Hawkeye offensive coordinator Greg Davis knows who they key guys will be on offense as they prepare for the season opener — his challenge is to find the supporting players.

“We’ve got seven guys back who have played some ball, so that’s an encouraging thing. We we ant to do, is we want to get better each day as an offense, and then when we get to scrimmages and we play in game situations, we want to get into as many of those situations as you can without your quarterback being played live,” Davis explains.

The offensive game plan will come together after Davis sees who stands out. “You want to install the offense — there’s no question — but you also want to find out who is ready to help this year,” Davis says. “And then when you kind of know who is ready to help this year, then you can start trying to determine how many two tight ends will be play, how many three wide receivers.”

Davis has senior quarterback C.J. Beathard to get everything started, and he says that gives them a lot of options. “He’s a guy who can do a lot of different things, from under the center from in the gun, it doesn’t really matter to him. The biggest thing is he’s done it now. And we felt last year at this time when we were talking he would do what he did. But he hadn’t. Now he has,” Davis says.

Iowa lost a couple of experienced receivers and moved redshirt freshman Ryan Boyle of West Des Moines over from quarterback to help give them more depth. Davis says Boyle was moved to slot receiver in spring and now Boyle is starting to pick up the nuances of the postion. He also likes what he has seen of freshman Devonte Young. “I think it will end up being a pretty good group,” Davis says. Davis says the idea was to get Boyle on the field, and his change of position for now is a one year experiment.

“I didn’t see Ryan getting in the mix this year, and I didn’t see it hurting him when we come back in the spring,” Davis says. Davis says he’s confident the offensive line will be good again this year, and that’s why it’s key to find out who can play where at the skill positions to determine how to develop the offense. Iowa opens the season at home on September 3rd against Miami of Ohio.