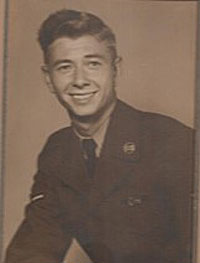 An Iowa woman attended the funeral of her brother this weekend nearly 64 years after he died in a military plane crash in Alaska.

Airman 3rd Class Wayne Dean Jackson of Downing, Missouri was one of 52 men who died in a 1952 military plane crash in Alaska. Remains were recovered from the wreckage site and then in March the military identified some remains as being Jackson’s.

Vicki Kelso Dodson of Nevada, Iowa, who claimed Jackson as a brother, said Iowans and Missourians gave him a great welcome home Saturday. “Complete towns were out waiving flags with their hands over their hearts and it was just amazing…it was really overwhelming,” Dodson says. Jackson’s mother died 17 years ago, and Dodson says she always wanted to bring him home.

“He’s out of the ice, he’s home, he’s off the mountain. And his mother is looking down, I know she is, his mother and dad, he’s home,” Dodson says. Of the 52 men that died in that crash, remains from 33 have been identified. The military intends to continue searching for the remains from the others.

Thanks to Alisa Nelson, Missourinet