You are here: Home / News / Jefferson casino marks its first year of operation 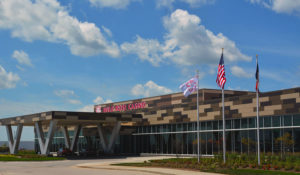 The Wild Rose Casino in Jefferson marked its first year of operation Friday. It’s the last casino to be built on a new site in Iowa that didn’t replace and existing casino or riverboat.

The developer of the casino, Gary Kirke, says he had never thought about building in the Greene County town until a supporter brought in a map. Kirke says he saw what he calls a donut hole the current casinos weren’t covering and decided it would work to build one there.

“And from that day on the whole Jefferson and Greene County and the people have been wonderful to deal with. They went back an organized and got the largest first vote referendum passed in the state of Iowa — over 75 percent of the people voted for it,” Kirke says. He says people bought into the idea that the casino could bring good things.

“That town, just like when we did Emmettsburg, needed a lift. And it has really sparked a lot of economic development in that town already,” Kirke says. Figures from the casino show nearly 500,000 people have visited the casino, while 25,000 people have attended shows, concerts, meetings and conventions. 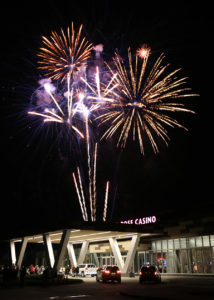 Fireworks on the night of the casino’s grand opening.

Not everyone backed the idea of a new casino in the town, but Kirke says he’s seen few negatives for the community. “You know people talk about casinos bringing in problem gamblers — the state pretty much covers that — they talked about how it will increase the crime rate and bring in strip clubs and things like that,” according to Kirke.”You hear everything, but quite frankly that’s not happened there. We’ve had some instances there, but not out of the normal.”

He says contributions to the casino’s non-profit organization have benefited the city, schools, community projects and surrounding counties. Kirke says the state is now almost saturated with casinos, with the only area he sees as being underserved is central Iowa in what’s called the Golden Circle area around Des Moines. He says that state’s gambling industry could face a threat from across the border.

“Nebraska is seriously considering gaming and it has gone as far as it has ever gone before,” Kirke explains. “They’re seeing $500 million a year going across the river there, and one of these days I think they are going to wake up.” He says if Nebraska approves gambling, Iowa will have to react.

Photos courtesy of the Wild Rose Casino in Jefferson.