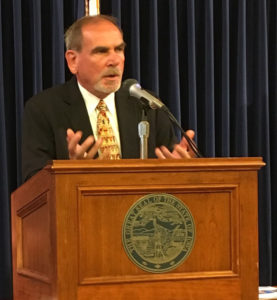 The chief information officer for the State of Iowa joined the governor today in unveiling a report that outlines a new cyber security strategy for state government. Bob Von Wolffradt says state government is entrusted with a lot of data.

“What we’re trying to do is provide a lot more visibility on cybersecurity from a threat perspective, but also a mitigation perspective,” Von Wolffradt says. “And also to help our employees to navigate and deal with all of the electronic data that passes in front of them.”

“The present law enforcement agents, they didn’t get training in cybersecurity when they went through the Law Enforcement Academy,” Branstad says. “But it’s become a much bigger issue here in recent years and that’s the reason why we think we need but also the people that have been in law enforcement for some time.”

State employees need more training, too, according to Branstad.

“It’s an ongoing thing that we all need to work on,” Branstad says. 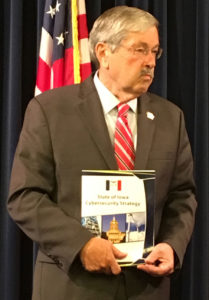 Branstad points to what happened in South Carolina in 2012. An international hacker gained access to a computer in South Carolina’s Department of Revenue, exposing more than 3.5 million Social Security numbers and nearly 400,000 credit card numbers belonging to South Carolina taxpayers. The chief information officer for the State of Iowa says computer systems in each state agency here are being graded to identify and fix risks.

“We want to report that to the governor so he has a really good idea of what’s going on in the executive branch,” Von Wolffradt says.

“People don’t want to talk about their vulnerabilities or whatever, but we do want the sharing of information. We want the knowledge that’s gained by those that have successfully thwarted cyber attacks to be able to be shared with others whether they’re in the private sector or state and local government…Things like utilities are a particular target that we want to protect.”