You are here: Home / News / ‘You really don’t need’ your own gun at State Fair, Branstad says 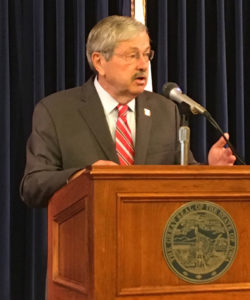 Governor Terry Branstad says he’s always felt safe visiting the Iowa State Fair, but Branstad isn’t completely ruling out approving a new state law next year that would allow guns on the fairgrounds during the fair.

“I understand that there may be issues coming before the state legislature on that,” Branstad says. “I’m just saying that I’ve gone to the State Fair for decades and decades and I just want to complement the Fair Board, the Department of Public Safety, our state troopers. They do a phenomenal job.”

Since 1980, fair-goers have not been allowed to carry guns on the grounds during the State Fair. On Friday, a legislative committee held a public hearing on the issue. Gun rights advocates want legislators to pass a law allowing Iowans with permits to carry their guns during the fair. Critics say they fear having hundreds of guns in the midst of large crowds, especially when some fairgoers are getting drunk.

The governor says there’s a heavy law enforcement presence on the grounds during the state fair’s 11-day run.

“I support the right to carry, but I think the fairgrounds is a little different situation because we have such phenomenal coverage from the Highway Patrol at the fair…It’s not like other places where you have nobody with a firearm to protect somebody against a violent act,” Branstad says. “You really don’t need to have your own firearm for your protection at the fair.”

During the 1996 State Fair, a couple who sold funnel cakes at the fair were found bound, gagged and shot to death in their trailer on the state fair campgrounds. It was a murder-for-hire scheme that involved the couple’s daughter, her husband and an employee of the funnel cake stand who was hired to do the shooting.