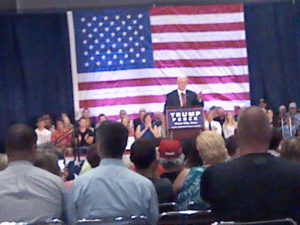 “To streamline deductions, to lower taxes across the board, to lower marginal income tax rates, reduce income taxes dramatically, make child care fully deductible and end death taxes once and for all for every American,” Pence said, to cheers.

Trump’s economic plan calls for lowering the corporate tax rate to 15 percent, something Pence emphasized in his Sioux City appearance.

Pence established a moratorium on new state regulations in Indiana when he became that state’s governor in 2013 and Pence promised that Trump will do the same at the federal level.

“When he becomes president on day one he will sign a moratorium on new federal red tape and work to roll back the EPA’s Clean Power Plan, the Waters of the United States rule and end the ‘war on coal’ once and for all,” Pence said, to applause.

Pence served six terms in the U.S. House of Representatives. He’s been governor of Indiana since early 2013. Pence withdrew his bid for reelection as governor when he became Trump’s running mate.

Hillary Clinton is scheduled to be in Des Moines Wednesday. According to a campaign advisory, Clinton will “discuss her plan to create an economy that works for everyone, not just those at the top.”