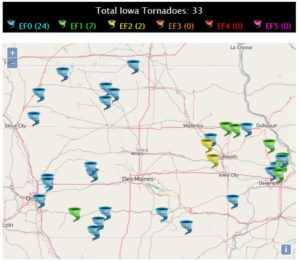 It’s a below-average year for tornadoes in Iowa. While they can strike during any month of the year, the peak time for twisters in the state is usually during May and June.

Kevin Skow, a meteorologist at the National Weather Service in metro Des Moines, says Iowans should not let their guard down as dark clouds could still spawn dangerous, swirling cyclones.

“So far this year, we’ve seen 33 tornadoes across the state and our average number of tornadoes is typically around 48 to 49 in a given year,” Skow says. “However, even though the bulk of our tornado season, the typical climatological peak is past, we can still see late-season outbreaks as was the case last year with our November 11th and even some December tornadoes. We’re certainly not out of the woods quite yet.”

Of the 33 tornadoes confirmed in Iowa this year, 24 of them were rated in the weakest category of E-F-0, while seven were E-F-1’s and only two got big enough to rank as E-F-2’s. There have been no E-F-3’s, fours or fives.

“Most of our tornadoes, generally the vast majority, are weak EF-0,” Skow says. “They’re very short-lived and have path lengths a mile or two at best. Many times, they didn’t impact any structures and again, they’re very weak, which is what we’d like to see.” The first three confirmed tornadoes this year all touched down on March 15th in Scott and Clinton counties, while the most recent tornado was just last week in Council Bluffs. That twister on Thursday afternoon was a relatively rare “rope” tornado or waterspout that churned up Lake Manawa.

Hundreds of people in the metro area saw it and took pictures and video, including one passenger on a jetliner landing at Eppley Airfield in Omaha. “We were very, very thankful it didn’t move anywhere,” Skow says. “It just sat out over the lake there and didn’t move. It didn’t impact anything. It was just stationary and lasted at least five to ten minutes.”

Something else that’s unusual this year, there were two days where 5 tornadoes were reported on the same day: April 27th saw 5 twisters in southwestern Iowa and July 17th brought 5 more in eastern Iowa. Last year, Iowa recorded 58 tornadoes.