You are here: Home / Education / ‘Super Lice’ a concern as kids prepare to return to school 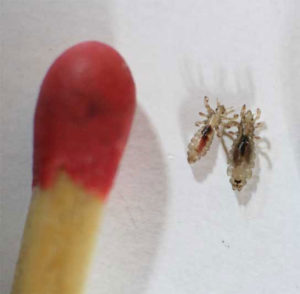 Head lice shown next to a match.

It’s back-to-school season and Iowa parents have something new to worry about: super lice.

Iowa is among the Midwestern states where the creepy-crawlers are being found. Jennifer Stiles, a disease prevention nurse at the Cerro Gordo County Department of Public Health in Mason City, says the lice have mutated and are tough to kill.

She says each lice kit has shampoo and a brush and a little comb in it, and combing the hair for 10-15 minutes every day to get those nits and any active bugs out is the most effective way of getting rid of lice. Stiles says if you spot your child itching his or her head a lot, that’s a big clue.

“Most of the time, you’ll see that they itch behind their ears or at the bottom of the neck,” Stiles says. “If the child’s complaining that they feel something crawling around their hair. Or if the child’s been exposed to somebody with head lice, they spent the night at someone’s house, it’s always a good idea just to make sure that you’re actively looking to make sure that child doesn’t develop lice.”