Iowa runningback LeShun Daniels is facing the normal things a senior feels as they prepare their final season, but this will also be the last season of being on the field with his brother James, who played in the offensive line last season as a true freshman.

LeShun says being on the same team means a lot to them. “It’s big, not many people get to play football at any level with their siblings and let alone to get to play at Big Ten school like the University of Iowa with their brother,” Daniels says. “So, it’s been a great experience, it’s something we cherish. Especially with him being on the o-line and me playing runningback — it makes it even better.” 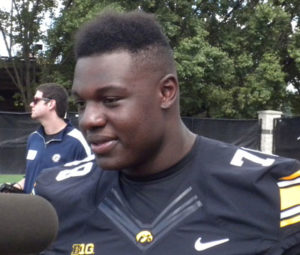 James is slated at the starting right guard on the preseason depth chart and says as a sophomore he relies on his brother’s experience.

“If I do something wrong, he lets me know, ‘James that’s terrible’ that’s like the advice he gives me,” Daniels says. Although James is younger, he is bigger at six-four 295 pounds compared to his brother who checks in at six foot and 225 pounds. The two players from Warren, Ohio want to improve on what they do at their individual positions. For LeShun that means staying on the field all season

“I need to stay healthy, because you can’t really help much if you are not on the field. So that’s obviously one of the biggest things I have to do, is to stay healthy,” LeShun says.

Iowa opens the season on September 3 against Miami of Ohio.