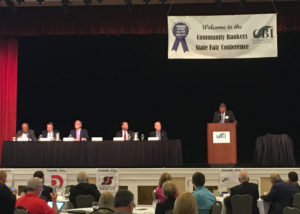 Republicans at the Iowa State Fair.

Federal office holders from Iowa and their General Election challengers are raising questions about the Farm Credit System, a nationwide network of banks established by the federal government in 1916 to help farmers.

Republican Senator Chuck Grassley says he supports the system, but it has operated outside its charter.

“They came to my office to talk to me and I brought up some of the loans that were very questionable loans,” Grassley says. “I got the feeling that they were very embarassed by the issues that I brought up with them.”

“There are probably reforms that need to be made and I would suggest to you that we are going to have a real opportunity to do that next year as we write the new Farm Bill,” Judge says.

“They write their own mission statement,” King says. “I asked the chair of the board that before an Ag Committee hearing some time back and, you know, my message to that was: ‘We may have to help you write that mission statement.'” 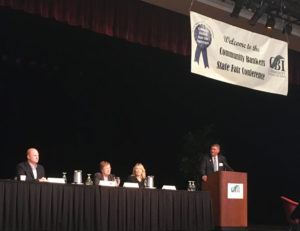 “Even though it has a rather rustic appeal, it isn’t exactly a farm-related business,” Weaver says. “I would look at actually having a little bit more monitoring of that because I really don’t think it’s fair.”

Republican Congressman David Young of Van Meter says the Farm Credit System must be held to its original mission.

“Choice is good out there, but one of the choices out there is backed by the taxpayer, in a sense,” Young says. “…Have they been operating outside of their purview?”

“When you look at some of the recent activities, like the Verizon loan that they made, this is way outside of its intended scope of purpose,” Mowrer says.

“But we need to make sure that they’re not competing in the areas that they’re not supposed to be in,” Blum says. “…They’ve made some very big loans to some very large and profitable customers that whether they’re ag related is very, very questionable.”

“I will say just blanket, though, I’m suspicious of all government sponsored enterprises. I’m not sure why we need those at all,” Peters says. “If things can be delivered in a marketplace, they should be. If they are not able to be delivered in a marketplace, then government I think should provide those services if they can’t or won’t be provided otherwise.”

The candidates made their comments this afternoon during a meeting of the Community Bankers of Iowa. Congressman Loebsack and Monica Vernon, the Democratic candidate in the first congressional district who’s running against Blum, did not attend.

The 80 Farm Credit banks do not have to pay taxes on mortgage loan interest and other banks are lobbying congress to end that tax break. Supporters of the system say it’s a crucial source of financing for all of rural America, not just farmers.