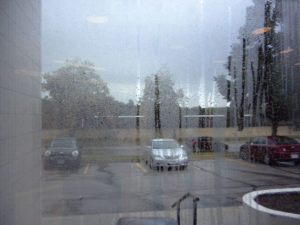 Rain in Des Moines is greeting fairgoers on opening day.

Forecasters say the weather won’t cooperate much for the opening day of the Iowa State Fair.

Besides the heat and humidity, thunderstorms are forecast with the potential for heavy rain. Meteorologist Mindy Beerends, at the National Weather Service, says a Heat Advisory runs from 1 this  afternoon until 8 tonight for a wide section of south and central Iowa.

“We’re expecting intermittent storms throughout the day and then more widespread showers and thunderstorms late this afternoon and into the overnight hours,” Beerends says, “which could bring heavy rainfall to much of the area.”

While the heat and humidity combined may bring heat indices this afternoon as high as 105 degrees, much of Iowa will also likely get drenched.

“We’re expecting to see rainfall amounts of one to three inches, especially where storms persist and in some localized areas, we could see amounts of four to six inches, potentially,” Beerend says. “Lots of heavy rainfall could lead to flash flooding so we have a Flash Flood Watch out through 7 Friday morning.” She says dry conditions should return tomorrow afternoon along with somewhat cooler weather into the weekend.