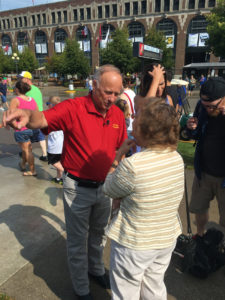 Republican Congressman Steve King predicts this year’s presidential election will be “a landslide” — he’s just not predicting whether Donald Trump or Hillary Clinton will win.

King says he agreed with “almost all” of what Donald Trump said last month in Cleveland when Trump formally accepted the GOP’s presidential nomination, especially the “big stuff” like immigration reform and lowering the corporate tax rate. But King also says he has a “history” of working with Hillary Clinton.

“I worked with her eye-to-eye and face-to-face across the table when there was no staff and no press and I can reason with Hillary Clinton under those circumstances,” King says. 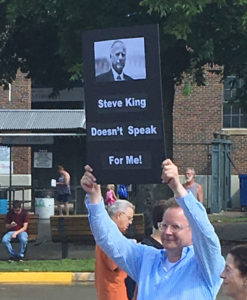 However, “a lot of water has gone over the dam since then,” according to King, and King says he’s “not very happy” with the results of her leadership as the country’s secretary of state.

King spoke with reporters today after speaking for 20 minutes on the Des Moines Register’s “Soapbox” at the Iowa State Fair. King got a couple of boos when he took the stage, but there were no protester disruptions or boos during King’s remarks. One man stood silently at the back of the crowd holding a sign which read: “Steve King Doesn’t Speak For Me!”