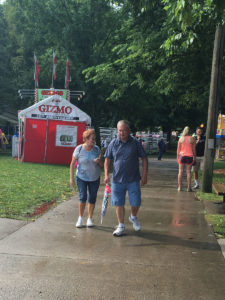 People at the Iowa State Fair were greeted by rain.

A family from Florida was unphased by today’s rainy opening of the Iowa State Fair. It’s the first time Sarah and Nicholas Getchell of Orlando have been on the fairgrounds.

His primary goal is to get some prime Iowa beef at the fair.

“Brisket,” he says. “I want the bacon-brisket-grilled-cheese. That’s what I came here for.”

Getchell is in Iowa to visit relatives like Joy Schirmer of Tama. She says there are pros and cons to the rain, one being there aren’t throngs of people.

Only one member of this extended family was walking under an umbrella as it rained, although two babies were under the canopy of their two-seater stroller.