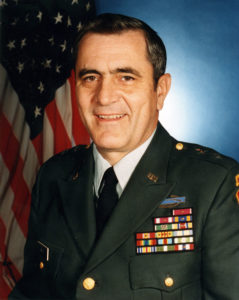 A native Iowan who was a former leader of the Iowa National Guard and Hawkeye football MVP has died.

Retired Major General Warren “Bud” Lawson of Ankeny died Wednesday from complications of Alzheimer’s Disease at the age of 83. Iowa National Guard spokesman, Colonel Greg Hapgood, says Lawson graduated from Fairfield High School and then went to the University of Iowa where he graduated from Reserve Officers Training Corps as a second lieutenant in the Army.

“General Lawson came from a family that valued military service highly, he had two brothers who also served in very senior officer positions as well. Clearly he was a guy who really knew what he wanted to do in life. He was just absolutely excellent as a soldier and a human being. All the superlatives that you would attach to someone, you would attach to him,” Hapgood says.

Lawson also played football at the University of Iowa and was named the team’s Most Valuable Player in 1954. “Truly General Lawson — he was the whole package — he was absolutely committed to whatever he did. He was a rally bright guy, he was absolutely fair, his integrity was beyond reproach. He really was the best of the best,” Hapgood says.

Lawson was in the infantry and served assignments in Germany, Fort Riley, Kansas, Korea and as an assistant professor of military science at the University of Nebraska. Lawson was deployed to Vietnam in 1967 where he served for one year before returning for various assignments in the United States. Hapgood says Lawson retired from active service in 1979 and was appointed next day as the deputy adjutant general of the Iowa National Guard.

“When General Lawson left active duty service and came to Iowa, the National Guard really needed him,” according to Hapgood. “It was a period of time in our nation after Vietnam when the military wasn’t very well thought of in the nation and Iowa for that matter. And he really brought the esteem of that service back and the expertise and professionalism and the excellence of that service back.” Lawson’s time as leader from the mid 80’s through the 90’s saw several challenges for Iowa’s citizen soldiers including help with the farm crisis.

Hapgood says there were multiple challenges from disasters to combat for Desert Shield and Dessert Storm in the early 1990’s where Lawson readied an entire infantry division. “He just really was someone who had tremendous vision and force of will. If he was going to do something, he was going to figure out how to do it and he was going to do it incredibly well. He was an amazing guy.” Lawson’s tenure included two of the biggest disasters the state has seen.

“United Airlines Flight 232 at the Sioux City Airport — which was just a disaster on an enormous scale — likewise for the floods of 1993. He oversaw the response to that for the Iowa National Guard,” Hapgood says. He says Lawson’s leadership approach help the state get through those disasters.

“He was someone who was a great unifier, he brought people together, he demanded excellence in you. He was incredibly competent in what he did,” according to Hapgood. Lawson retired as the Adjutant General of the Iowa National Guard on June 19, 1999, after 14 years of service to the state and more than 44 years of combined military service.

“After General Lawson retired it’s not like he just decided to go find a rocking chair…whether it was in his community or helping veterans or through the University of Iowa Alumni Association, he was a guy who was very much engaged in the community. His loss just leaves a lot of people with hurt,” Hapgood says.

Lawson is survived by his wife, Bobbie and their daughter, Laurie. He was preceded in death by his son, Lance. Funeral arrangements are pending. The family asks that in lieu of flowers, food or gifts that memorials be made to the Alzheimer’s Association of Greater Iowa.

Governor Terry Branstad issued this statement on Lawson’s death:
“I am saddened to hear of Major General Bud Lawson’s passing. Major General Lawson was a friend of mine who led the Iowa National Guard as our State Adjutant General during my early years as governor and we enjoyed a very close working relationship. He was a patriotic and dynamic leader who set very high standards for readiness of our troops and I appreciate his dedication to our country and state. Chris and I wish to extend our thoughts and prayers to his wife Bobbie and the rest of the Lawson family during this difficult time.”