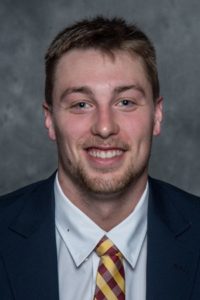 As the established starter at quarterback Joel Lanning will take on more of a leadership role for Iowa State this season but that does not mean he will be more vocal. Cyclone coach Matt Campbell says the Ankeny native leads by being one of the hardest workers on the team.

“It is really hard to lead from the back”, said Campbell. “When it is time to speak your leadership has to come from your ability to do everything right and be consistent. That is what Joel provides our football team.”

Lanning says his will never be mistaken for a “rah-rah” kind of guy and prefers to let his actions speak.

“I am not the type of person that is going to get in someone’s face and belittle them”, said Lanning. “Maybe sometime that needs to be done but it is not going to come from me. I am the tuype of guy that will try to lead by example.”