You are here: Home / Agriculture / Unwanted weed in Madison and Muscatine counties linked to CRP plantings 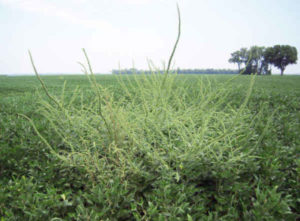 “Both sightings were found in new CRP plantings that were planted to a diverse mix of various native species. One was for pollinator habitat and one was for quail habitat,” Hartzler says. “It’s another way that Palmer is finding its way into the state, so that is a concern.” Palmer amaranth is a threat crop production, but Hartzler says farmers should not be overly concerned with this latest finding — at least for now.

“Our concern is that in the year or two that the Palmer is likely to survive in this habitat, some of that seed could move into crop fields,” Hartzler explained. Many CRP seed mixes have species produced in other states, according to Hartzler, and it’s possible the seed came from a state with more widespread Palmer amaranth issues.