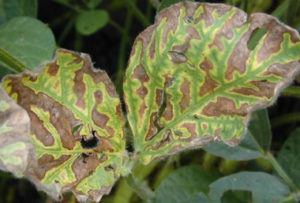 Iowa soybean growers are on the lookout for a number of diseases just as most plants are setting pods. Sudden death syndrome in soybeans is being reported in many parts of Iowa.

“They’ll senesce early and they’ll drop leaves faster,” Claussen says. “You can’t do anything with it now, but as you move into next season you have to think about the history of a specific farm. One, you start with genetics, and two, you can treat with a soybean seed treatment that is highly effective.”

Soybean aphids are also starting to show up in greater numbers, according to Claussen. “Aphids like it mild. They like 77-78 degrees — their reproduction will go through the roof if that be the case,” Claussen said. “We are ramping up and have expectations to pull that trigger here rather soon.” White mold could also be a problem for soybean growers this year, according to Claussen.