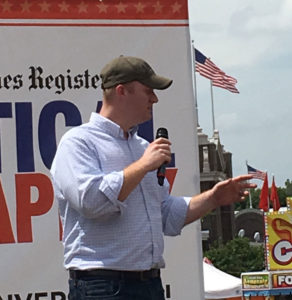 Jim Mowrer, the Democratic candidate in Iowa’s third congressional district, says his Republican opponent hasn’t shown a willingness to be an independent voice in congress.

“While I was at the Pentagon I had a front-row seat.to see how broken that our current congress is. We can barely keep the doors open. We’ve had government shutdowns,” Mowrer says. “We can’t address the big things that continue to face our country and right now, unfortunately, we have a representative in David Young who broke nearly every promise he made in 2014.”

Mowrer predicts Young won’t stand up to Donald Trump if Trump’s elected president. Mowrer points to how Young changed his “yes” vote to a “no” on a Democratic proposal that would have barred government contractors from discriminating against gay and lesbian employees.

“David Young doesn’t have the ability to stand up to Republican leaders in Washington,” Mowrer says. “We need a representative who will put Iowa first, not politics first.”

Young later voted yes on a proposal drafted by Republicans that accomplished some of the same non-discrimination goals.

Mowrer made his comments this afternoon during an appearance on The Des Moines Register’s Soapbox at the Iowa State Fair. Young gave a 17-minute speech on the Soapbox last week, but Young did not mention Mowrer.