You are here: Home / News / Grassley says he has plenty of soapboxes, not at the Iowa State Fair

A longtime staple of the Iowa State Fair is the Des Moines Register’s Soapbox, where politicians give speeches and take questions, but Iowa Senator Chuck Grassley is not on this year’s schedule.

His opponent, Democrat Patty Judge, released a statement saying it’s because “Grassley doesn’t want to answer serious questions from voters,” but Grassley has a response for that claim.

“I’ve never done the Soapbox because I have a soapbox every time I have a Q-and-A with constituents in all 99 counties,” Grassley says. “So, I do have my soapboxes, I just don’t do them at the state fair.” Grassley says he’s visited all 99 of Iowa’s counties every year for the 35 years he’s been in office and has 12 more to go this year. It’s been coined “The Full Grassley.” 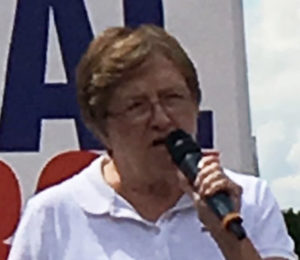 Grassley visited the Iowa State Fair on Monday and says he keeps a tight schedule at the fairgrounds in Des Moines. “I see the things that I enjoy seeing but I also work at the pork tent,” Grassley says. “I also give interviews at radio stations. I’ll bet I gave four or five interviews yesterday, as an example.”

Judge spoke at the State Fair Soapbox on Sunday.