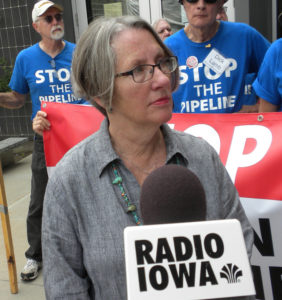 A group that opposes the construction of the Bakken oil pipeline asked the Iowa Utilities Board today to do more to oversee violations of the company that’s building the pipeline across 18 counties.

Carolyn Raffensperger of Ames is one of the members of the Bakken Pipeline resistance coalition, and says Dakota Access agreed to several protective measures in the easements signed with landowners.

“But what we have seen is there is no way to enforce the laws, the rules, the contracts that Dakota Access agreed to be bound by,” Raffensperger says. Raffensperger is the Executive Director of the Science and Environmental Health Network and says they want oversight on the pipeline construction similar to what is in place in South Dakota. 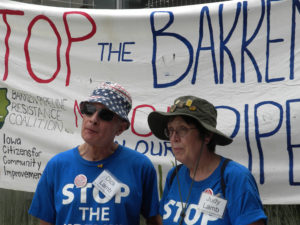 “We need to have a public liaison officer that we can call that we have the phone number for, that a landowner can call and says ‘they are going on land that is not part of their easement.’ They are doing construction when it is too wet, we can report sedimentation of the rivers,” Raffensperger says.

She says the IUB put stipulations in their order that granted the construction permit, but gave the company a “blank check” and is not doing anything to enforce them.

Raffensperger says they have created a network of people to be watchdogs over the construction. “They have no place to report these violations, and so it is incumbent on the Iowa Utilities Board to revoke that blank check, and to put in place a way to enforce their laws,” according to Raffensperger.

Boone County landowner Dick Lamb says the pipeline cuts through his farmland and they have been trying to figure out how to get across it to harvest. He says there’s other information they need too.

“We are trying to figure out how to be compensated for the damage to our crops — we’ve left numerous phones calls, we’ve tried to reach someone — we cannot get an answer from Dakota Access. We cannot even find anybody to talk to,” Lamb says. Lamb says state regulators should do more to help out landowners.

“I don’t even blame Dakota Access, because they are doing what corporations do. They’re making money for their shareholders, they are cutting costs. The fault lies here with the Iowa Utilities Boars,” Lamb says and was interrupted by people saying “yeah” and clapping, “The government, the state of Iowa they allowed this to happen they enabled it to happen.”

Raffensperger says their watchdog group has posted photos of violations on their Facebook page. She says their requests for help have gone unheard by the regulators. “We have not gotten any response from the Iowa Utilities Board. We did bring up some violations before and ask that they issue a stop work order, which they did not do,” Raffensperger says. “And what we have seen any time violations have been brought forward — first of all Dakota Access denies them — and then when they are brought forward as a valid infraction, the Iowa Utilities Board just goes ‘oh, don’t do it again.'”

“The kinds of violations of the individual contracts, farm-by-farm, waterway-by-waterway, drainage district by drainage district, road-by-road, park-by-nature trail, we can’t keep track,” Raffensperger says. “Even our watchdogs are having trouble keeping track, so how do you report…we have no place to report it, unlike South Dakota.” She says a public liaison officer would be able to address the complaints from county boards and the public to ensure the enforcement of the rules place on Dakota Access.

A spokesman for the IUB, Lewis Vanderstreek says the request for a liaison was included in the process of approving the construction permit. He says the board has not acted on that request and he is not sure when they might. Vandesteek also says they have several methods in place to deal with county level complaints and have been working to address those.